The Evox is a 72 volt, fully electric, single seat, dune buggy. I began this electric car project in September of 2007 as my senior industrial design project at Appalachian State. This following photos will go through the complete tear down and rebuild process that I went through.

I don’t know exactly where this buggy began it’s life but I was told by the guy that I got it from in Greensboro, that it was built in the early 70’s as a Baja racer. I traded a old Toyota pick up truck for the “rolling chassis” and a starting point for my electric buggy dream project. It’s been a challenging re-design but I’ve learned a ton about electric vehicle technology and overall weight distribution in a vehicle this size. Please feel free to post comments or send questions about the project to info@bigboomdesign.com

The Evox, “Electric Vehicle Ox” has served as my proof of concept car. My main goal in this projects was to take my knowledge of Volkswagen and interest in Electric vehicle design and combine them into a fun and rugged electric buggy design. My next electric car project is a 1974 Porsche 914. I’ll also be following that build project on this blog as I find time to work on the car and post my progress. You can view the 914 electric car project here.

I encourage anyone and everyone that has an interest in an alternative fuel sources to take the steps in your own life to learn more about it. Don’t sit back and wait for Ford, Toyota, or any other car company to mass produce an expensive electric vehicle. It’s cheaper and easier that you think to convert an older, more stylish car into a practical EV that you can drive everyday. Get involved, ask questions, do some research, and make it a reality.

Now for the evolution of The Evox

Picked up in Greensboro and taken to my house in Boone, NC. Over the next 3-6 months I began the process of slicing and removing all the body panels, gas tanks, wiring, cables, and everything else that was holding this beast together. 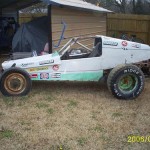 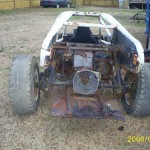 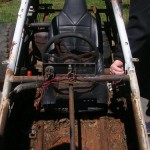 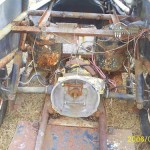 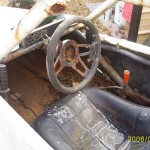 The body panels have been stripped/cut off the tube frame. The 1964 VW transmission is unbolted and removed for inspection, cleaning and painting. This also allowed me to easily roll the frame over in my workshop in order to get to the underside of the tube. I used about 20-30 wire wheels mounted on an angle grinder to remove all the rust from the tube frame. The floor pan was torched off as well as the rear skid plates. The entire frame was measured and recorded on drafting paper to later be rebuilt in Rhino, a 3D modeling program. This was a very tidius task to acuratly measure all the lengths, diameters, and angles of the tubes used in the frame construction. The carfull measurement and planning was well worth it once I had created a digital model of the car. I was able to determine how much space and clearence I had to work with for battery placement, load bearing points, suspension clearence and overall  space inside of the car. 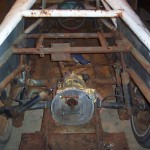 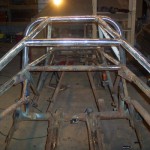 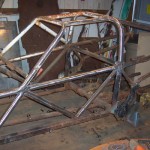 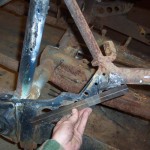 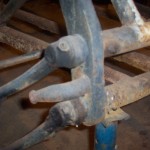 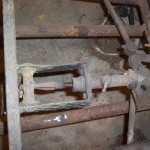 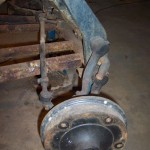 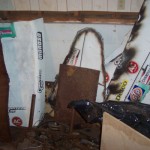 Around x-mas time I got the whole frame cleaned, down to the bare metal. I had to do a fair amount of “filling” with my welder to take care of all the pitting on the frame rails. I looked into having the frame powder coated although this was going to be very expensive. I ended up using about 30 cans of textured finish, high-grade rustoleum.

A few interesting things to point out about this batch of photos:

The original design of this buggy was built to take some major abuse. It can accommodate three shocks on either side of the rear end. It was equipped with torsion bar rebound stops (6th picture) to make sure the suspension does rip itself apart when the buggy goes airborne and the suspension unloads fully.  My favorite feature on the car are the cutter brakes that can be seen the easiest on the third photo. The black handles on either side of the steering wheel are attached independently to the rear emergency brakes. These can be used to skid steer the buggy on loose dirt or gravel. The last shot shows the front steering box from a traditional VW. The 2nd photo shows the orange shifter lever to the right of the drivers seat. The shifter linkage design is one of the only design elements that I saved from the original build. I didn’t feel the need to keep the “door hinge gas pedal” or “propane gas tanks”. 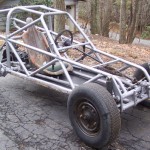 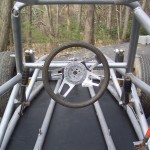 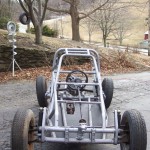 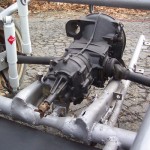 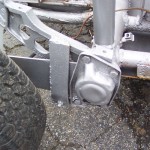 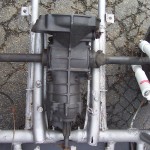 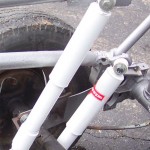 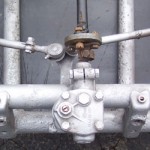 More to come as soon as I can find some free time. 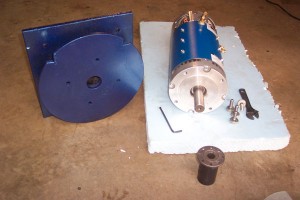 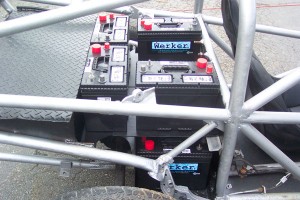 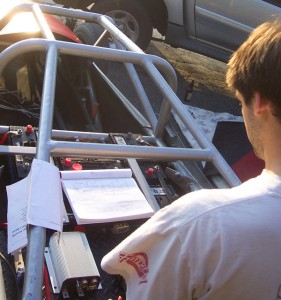 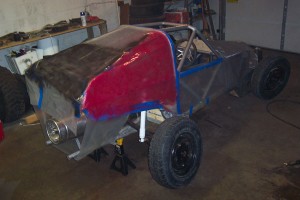 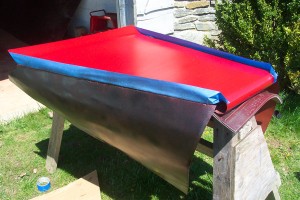 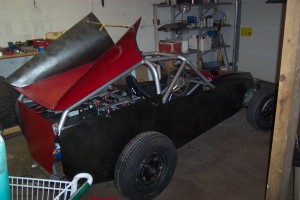