This is the step by step overhaul of a 1976 R75/6 BMW 750cc motorcycle. I’ll try to point out all the tips and tricks throughout the process to save time and unneeded wrenching.

A little history on the bike: I bought it from Carolina BMW in 2004 for $2,000. The bike was owned by a BMW mechanic for about 20 years. Check out a few of the parkway shots below to see the bike when I first brought it up to the mountains. Other than a fist size dent in the top of the tank, it was in immaculate shape when I first got the bike. 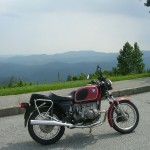 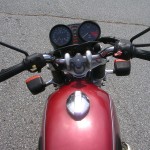 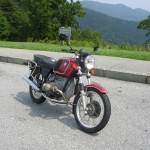 (Descriptions are below the images) 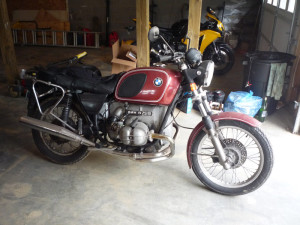 Before the work began 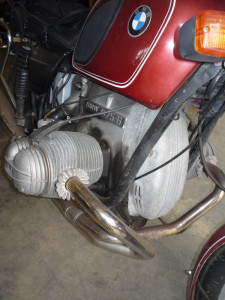 The oil leaks that drove me to tear into the bike 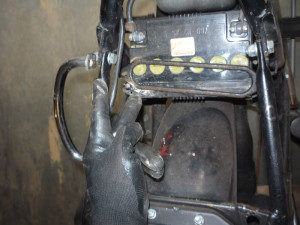 The side handle and the battery top plate removed. Maybe someone knows a trick that I don’t but I wasn’t able to remove the battery without taking the handle off as well as removing the two nuts that keep the battery tray from rocking back. 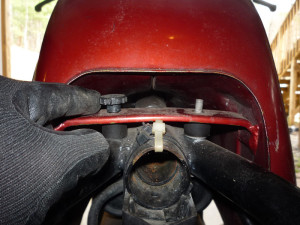 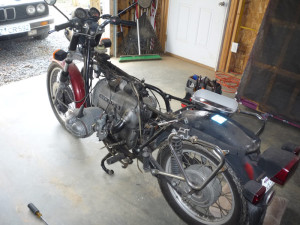 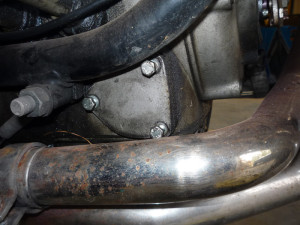 Remove the three oil filter bolts that hold on the cover 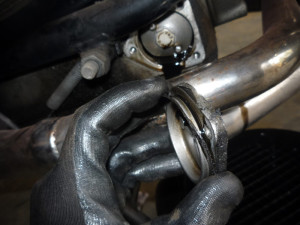 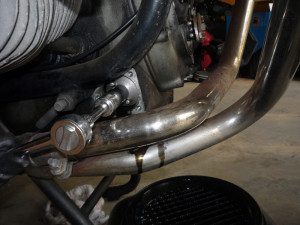 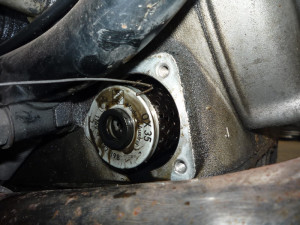 Oil filter removed with a bent piece of wire 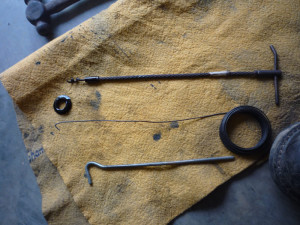 When I pulled the oil filter out it left behind the inner o-ring. The top cork screw tool is the one that finally did the trick. 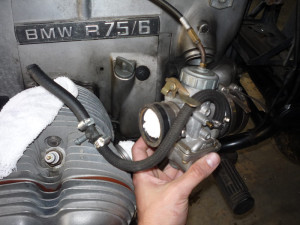 Left carb moved to the side 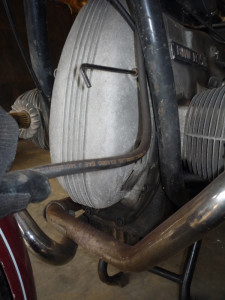 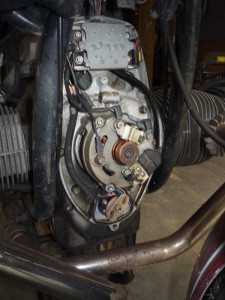 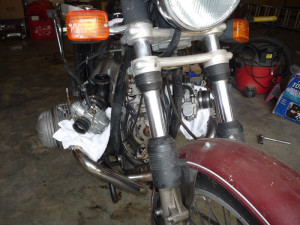 Carbs out of the way 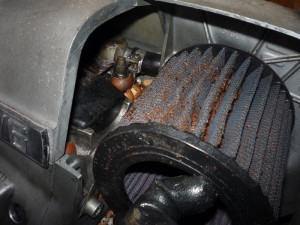 I pulled the air box cover and found that a squirrel had been using my bike for a winter food storage spot. 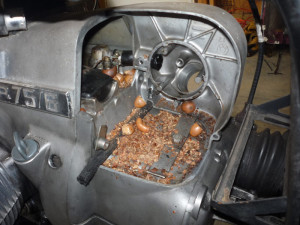 Amazing that my carbs aren’t clogged with all these acorns in the intake. 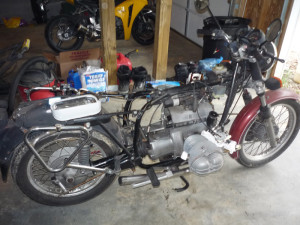 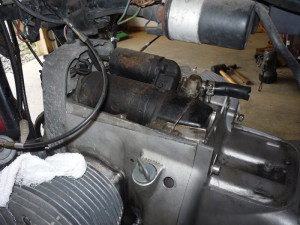 Starter cover removed to clean out the acorns 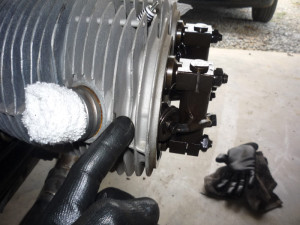 Don’t forget the two 10mm nuts between the fins on either side of the head. 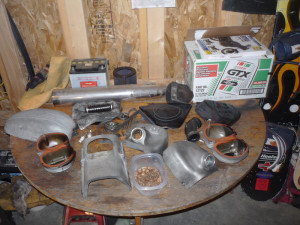 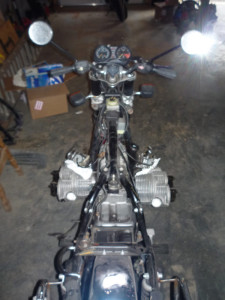 Removing the Rocker Arm Shafts. Don’t just take them off one by one, work your way around in a zig zag pattern.I found out after removing all six bolts that in order to get to the Push Rod Tube Seals you don’t need to split the cylinder head from the barrels. As you can see in the next picture the two middle bolts can remain on so that you won’t need to swap the head gasket. If you’ve got leaks at this seam you might want to replace the gaskets anyway. 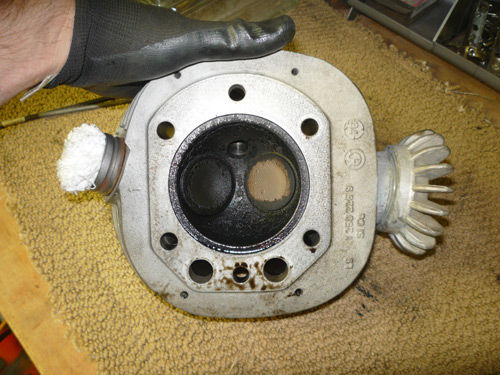 With the cylinder head removed you should lay it flat on a workbench and fill the dirty side full of tranny fluid or motor oil to watch for leaks around the valve seat. 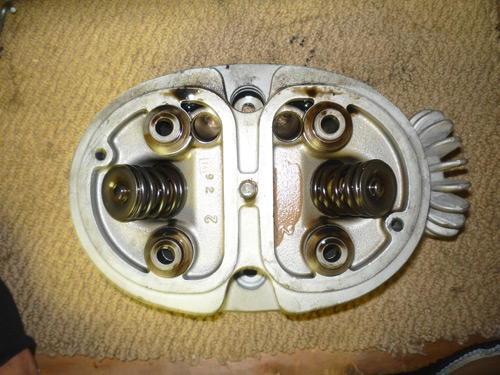 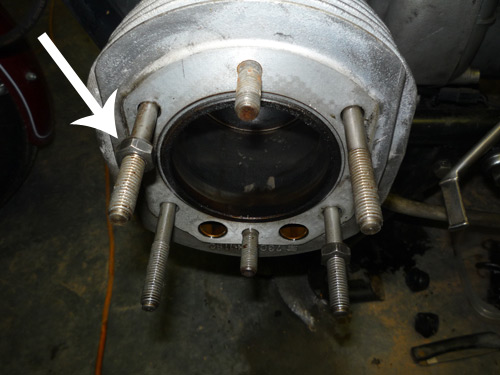 If you remove the cylinder head from the barrels you can re-thread a bolt back on as a stop. This is so you don’t have to deal with  the piston rings jumping out. 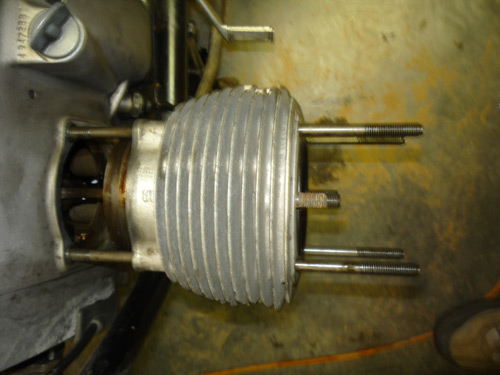 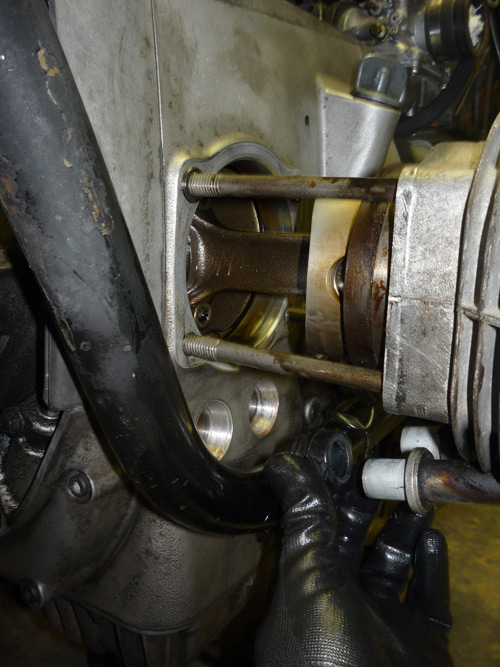 Here you can see the new seals going on the push rod tubes. They should have a line or arrow that needs to be oriented down.

One final post from our recent #skoolie trip down

We did a thing and survived yet again! Me, @beerr

Relaxing day at the beach. I don't say that often

If this doesn't scream adventure I don't know what

Goofy times in the woods with @ashevilleadv on lit

Christmas comes a little early for me this year. A

Loving this fall weather in the mountains. #explo

Damn! What an amazing machine Nick and his crew bu

Well the great Alaskan journey is now complete. Me

Hatchers pass... Alaska. We took the advise of a l

Our final day I'm Talkeetna, Alaska. We stayed in

Highlights from our trip into #denalinationalpark.

A few random shots from the past couple days in Al

Hanging out in Healy, Alaska for two days just nor

Talkeetna, Alaska. A cab, a cat and some shenaniga