A Little Bit of Background

I’ve recently learned about an Open Source software/hardware project named Arduino. It’s basically a programmable mini computer that lets you create an “if-then” system. If the project that I’m getting ready to explain seems a bit foreign, you may want to check out the Ted Video from Massimo Bizo (co-founder) – Below. He does a great job of explaining the versatility of this hardware/software combo. 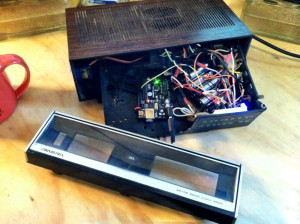 This project is starting it’s life in an old clock radio that I found in the attic of my house. I decided to open it up and see if I could recycle any of the parts for this project. I ended up using the case and main tray as the enclosure (for now) of the Arduino and sensors.

The Goal’s are simple:

I’ll be posting the ongoing progress reports of this project as it evolves.

You can follow the progress through this tag: Arduino Incubator

Waiting on the Spiders