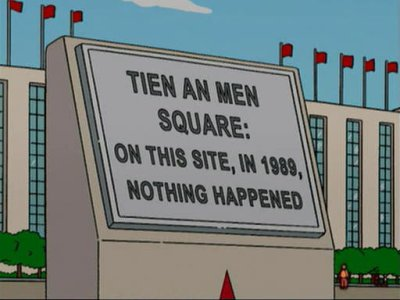 Today is the 20th anniversary of the Tianamen Square massacre in Beijing. Tianaman Square was home of the Chinese student freedom movement, the “Goddess of Democracy” statue, and the location for the iconic photo of the student staring down
a row of Chinese People’s Army tanks. However, if you use the Internet
in China, you probably won’t see anything about this event this week –
unless you’re clever.

Starting Tuesday, the Chinese government shut down access to virtually all search engines and social networking sites, including Twitter, Flickr, Bing (Microsoft’s new search engine), Live.com, Hotmail.com, Blogger, and others. All YouTube videos are also being blocked, as are BBC World News reports on the anniversary. These actions should come as no surprise, because China has previously censored Skype and blocked access to iTunes when it offered a pro-Tibetan album last year during the Beijing Olympics.

The Techcrunch UK website reports that some users are bypassing China’s restrictions by using VPNs, and third-party apps that use the Twitter API (TweetDeck, Twhilr, and Seesmic Desktop) are working.

Have you encountered the ‘Great Firewall of China’ or other country-specific restrictions on Internet access?

Professional Blogger and Social Media Expert in The High Country to hold second round of Social Media Workshops for area businesses.

Boomer Sassmann to speak at “Talk of the town: Using Social Media to create buzz”